Valdivia and its eternal catastrophe 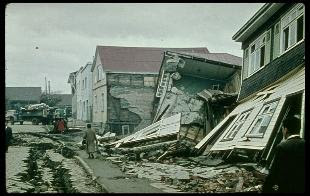 It was in May 22, 1960 when the history of Valdivia was darkened by tragedy. A tremendous earthquake of 8,5 degrees affected the cities of Valdivia and Puerto Montt in Chile. The quake originated 180 feet below the bottom of the sea and 100 miles into the Pacific Ocean.There were not extremely large numbers of victims,for such an earthquake, because the opulation was alerted on that something was going to happen by previous shakes and underground noise.

However, 2300 people lost its life in the quake and in the tsunami that followed it. 80 feet high waves devastated the Chilean and Peruvian coasts and they propagated at more than 200 miles an hour to the coasts of Hawaii, Philippines, and Japan, destroying everything on its way and killing many people. In Valdivia, the stories of the earthquake are alive in people’s minds. Immediately after the quake and knowing what will came next, the people of the lowlands run to the hills for
protection. But not all of them follow those security measures. Meanwhile the tide started to retreat
into the ocean, leaving the rivers dry.

Afterwards the inevitable arrived, a huge 80 feet tidal wave devastated everything on its way,taking with it fishing boats and sinking large ships. The wave followed the river course and damaged the city’s industrial zone leaving ruins that are
visible even today. Then the wave returned to the sea carrying back small boats with fishermen and whole houses with people alive asking for help while in their fatal travel to the ocean. They were not to be seen again. The landslides blocked the rivers and they threaten to produce a major flood, which could have erased Valdivia from the map. Hardworking and sacrifice stop it from happening, sparing the city of a worst disaster.

Valdivia lost much with the earthquake, however the city was rebuilt and it is now one of the most beautiful of Chile. The ruins of industrial installations and sunken ships are the only testimony of such a tragic day.