The brown bear is the symbol of the wilderness in North America. Once 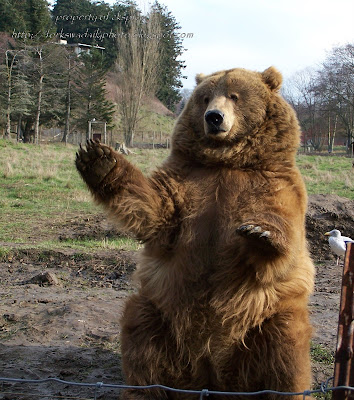 abundant, and with no enemies other than humans, the population of these bears is declining. Due to human expansion and the bear’s need for large spaces to forage and live, their natural habitat has reduced in size. The brown bears have also been sought as big game trophies and they also used to be killed for their meat and hides. In less than a hundred years, the numbers have gone from 100,000 to 10,000. As part of a global effort to protect the planet and the animals that inhabit it, the United Nations Environment Program (UNEP) administers one of the world’s largest conservation agreements, the Convention on International Trade in Endangered Species of Wild Fauna and Flora (CITES ). CITES is an agreement between governments to ensure that international trade of wild animals and plants does not threaten their survival. The CITES protects Brown Bears from illegal poaching for paws, trophies and gallbladders. To date, 160 governments are bound to the Convention, which offers varying protection to more than 35,000 species of animals and plants. Not a single species protected by CITES has become extinct since the agreement began in force in 1975.
Source: The Un Works