The Image of the Great Goddess as The Triple Goddess, young woman (Maiden), 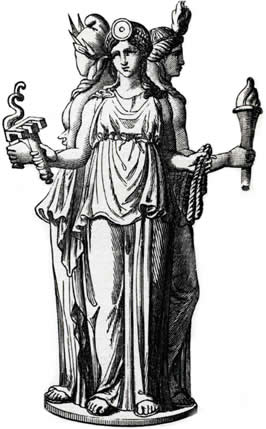 birth-giving woman (Mother), and an old woman (Crone), dates back to earliest mankind. They intertwined the three phases of the moon to correspond with the triple Goddess, the maiden was the new moon, the mother was the full moon and the crone was the waning moon. This concept has been embraced by many of our peoples past including the Celts, Viking and Romans. Many Goddesses can be divided among the three aspects, remember that some goddesses exist solely in one aspect.

You should call upon the Maiden aspect of the Triple Goddess when you need help with new beginnings in your live, whether they are jobs, relationships or projects.

The Mother is associated with motherhood, protection, fertility, growth, and sexuality. The Mother can be identified with the Full Moon, being the patron Goddess of the harvest, she watches over the fertility of women and animals. Her special festival is Brigantia also known as Imbolc. Her colour is red, and her animals are the cat, dove or dolphin.

You should call upon the Mother aspect of the Triple Goddess when you need help with things related with motherhood, protection, marriage, guidance, achievement of inner peace, choices of any kind, spiritual development and intuition and psychic gifts.

The Crone is wisdom, transformation, death, rebirth, banishing, and compassion. She is old in age but very wise and full of experience. She is the gateway to Death, and the guide to Rebirth. Morrigan, Goddess of the Dead, known in Ireland, who also reigned over battles. She had a Triple aspect in herself, and sometimes was also called the Three Morrigans.

We (witches) see life as an ever-flowing cycle. Contemplating this darker aspect of the Goddess teaches us that as well as everything in Nature moves in circles, and we as people must also do it, we need to accept death as a passage into another state, it is as valid and as much part of our lives as our own birth.

The Crone can be associated with the Waning Moon, and her colours are black, deep blue and the deepest purple. Her corresponding season is winter, and her animals are the owl, wolf, crow and raven. Her festival is Samhain.

You should call upon the Crone aspect of the Triple Goddess when you have to deal with work or emotional relationships that have come to an end, For rest before starting new plans, death, protection that is stronger than usual both psychic and physical.